My 3 year old’s favorite “vegetable” is spinach hummus by made by Roots, an Asheville company.  I’ve not been able to find it in my local grocery store lately, but did find their regular hummus (which is also some of the tastiest store-bought hummus ever) and decided to try to make my own version.

Yesterday afternoon in the garden, the boys helped me pick a few cups’ worth of spinach leaves (which, by

the way, was much less exciting to them than pulling up fat radishes, but that’s another story).   Then we washed the leaves and pureed them into a pulp with the immersion blender:

I added just a few tablespoons of water to get the process started.   I had a total of about 3 cups of fresh spinach leaves.  Oh, and it helped to chop them up with a knife before trying to use the blender.

Fresh raw spinach smells and tastes so sweet.  No wonder you can drink smoothies with that as a main ingredient.  My 5 year old wanted to eat it just as it was, without mixing it in with the plain hummus.

Note little bro licking the lid of the hummus container as he’s watching his big bro at work.

The 3 cups of leaves ended up being about 3/4 cup of spinach puree, which we stirred in with the plain hummus.  It was so good they finished the entire container off in about 10 minutes. 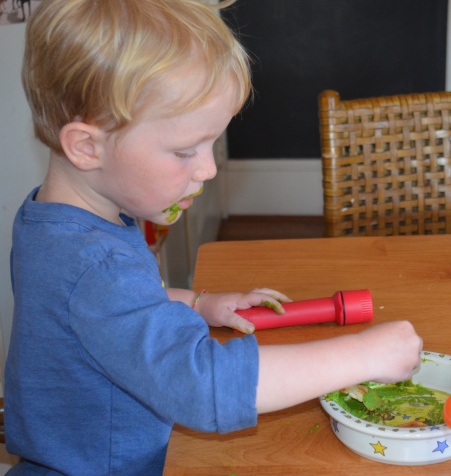 Preschooler wisdom: It's always important to have a flashlight handy, even when you're devouring spinach hummus on a sunny afternoon.