Last November our backyard beehive was raided and torn apart by a few hungry bears.

It’s been sad looking out at the corner of the yard where the hive had been.  I’ve missed those bees and their constant stream of activity that I used to watch from my kitchen window and deck.

This morning I headed north to Madison County to Wild Mountain Bees to pick up my new hive.  In beekeeper lingo, what I got is called a “nuc” —  a small, basic hive (including a queen) that you transfer into a larger bee box where they will produce brood and expand their population.

In preparation for the arrival of our new bees, I enlisted my brother’s help in getting an electric fence built around 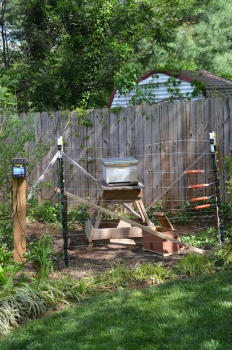 the hive site to keep hungry bears out.  Many of Asheville’s urban beekeepers lost hives last fall to bear raids,  and the only solution I’ve heard of is electric fencing.

Now, it’s not as pretty as when I had my simple cypress “cottage hive” without this web of shiny wires, black plastic control box, plastic orange gate latches, and green metal fencing posts — but practicality won over garden vanity here:

In an effort to keep things simple, we decided to use the more common size bee box to transfer them into (with 10 longer frames instead of 8 shorter as I’d had previously).

So I’m saving the old 8-frame boxes with the hopes of catching a swarm again this spring (I’ve put requests out on Facebook for anyone seeing a swarm to give us a call — and have since received one reply from a friend about a hive living in the wall of her in-laws’ house in Montford!  However I think that’s WAY above my beekeeping skill level.  Sounds like a rather surgical removal….)

To welcome the bees to their new home, my 3-year old boy donned his suit and helped hand supplies to us as we transferred the bees from the nuc box to their bigger, permanent box:

My brother getting ready to transfer bees

The bees were really mellow for having been closed up in the nuc box and ridden in the back of a pickup through the winding back roads of Madison County and at highway speeds back to Asheville for 30 minutes.  I’m thinking that was due to the low temperatures this morning.  But by the time we’d opened the nuc box it was almost 50 and sun was shining on the new box.  We found the queen quickly: 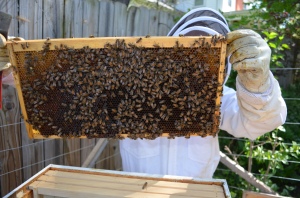 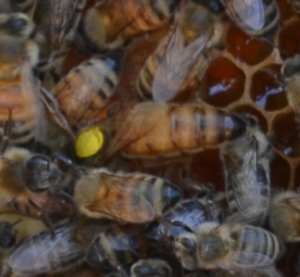 She’d been “marked” with a yellow dot on her back to make it easy to identify her when inspecting the hive.  I was able to find the queen in my old hive even though she wasn’t marked — the queen has a longer abdomen than all the other bees in the hive.

After we’d gotten the racks of bees transferred, we sat in the yard and were mesmerized watching them flying around the hive and getting their bearings. 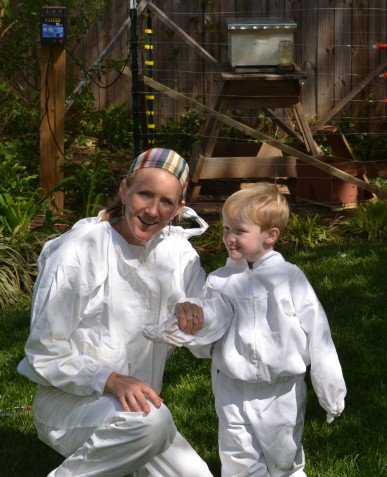 Me and my helper! (Note massive headband -- nothing more annoying than having long hair get in your eyes and face when you've got bee suit hat on -- I learned the hard way so the headband is now a critical part of my bee suit ensemble!)

Posted by ashevilleyardfarmer on April 13, 2012 in bears and bees, Uncategorized, Urban beekeeping